WT Theatre You on the Moors Now 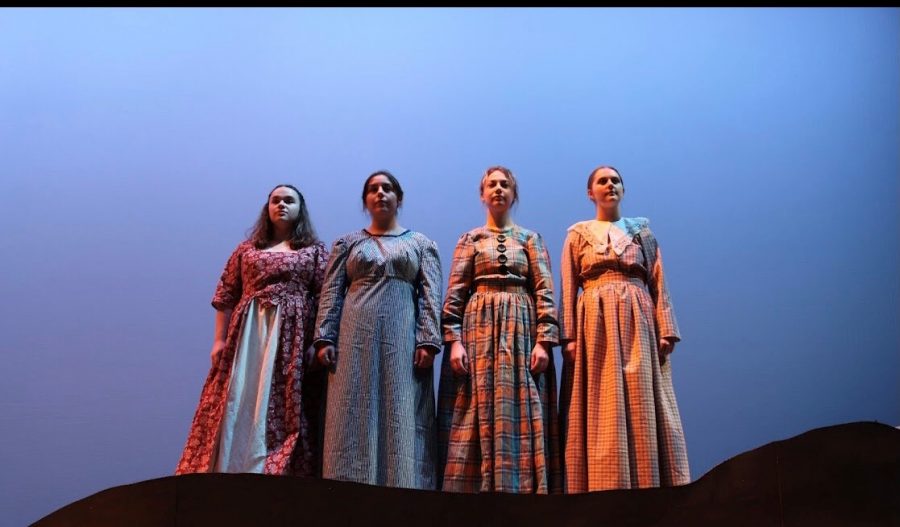 "You on the Moors Now" play exploring classical women as seen through a modern lens.

The opening night for “You on the Moors” was at the Branding Iron Theatre on the West Texas A&M University campus on Sept.17 at 7:30 p.m. The play is a look into women in literature, taking a look into the past in order to better understand the present. In addition to this, there was a focus on making sure that there were still modern elements that were as visual as the verbiage of the play.

An example is the use of swearing in the play, which allows for the absurdity to settle in. Classic characters are set on a modern stage in order to set a message about female empowerment. The characters must get married, but they do not want that. The classic stories of Pride and Prejudice, Jane Eyre, and Little Women are written in a new way that showcases the modern age while retaining the essence of the past.

The playwright, Jaclyn Backhaus, blends the classic stories of Charlotte Bronte, Emily Bronte, Jane Austen and Louisa May Alcott together. Backhaus imbued the play with an ingenious mix of the past and present to create a funny, but serious, story about women and the nature of a woman’s power.

Set in the stringent eras of England, the actors come to life as modernity meets the past. “The playwright likes to break the rules of normality.” The Director, Callie Hisek, assistant professor of theatre royal r. brantley endowed professor of theater studies, said. “Taking these strong women as a universal stand-in for women.”

The play has a mix of the past and the present, and so the playwright breaks the rules of normality by choosing not to set the play just in the past or present. The story is a twist on everything classic tales have been about. In addition to this, there are other modern takes on classic tales that have been done.

Other examples of twists on classic stories are “West Side Story,” which is an adaptation of Romeo and Juliet, and, “I, Frankenstein”. There is evidence that classic twists on stories can be inspirational and successful, as” I, Frankenstein” and “West Side story” were. “You on the Moors Now” acts upon inspiration to create a blend of stories for audiences to enjoy.

Audience members who have enjoyed adaptations of Jane Eyre, Pride and Prejudice or the Little Women will find these stories within the play, but within a background of female empowerment set against the many possibilities for women today, beyond the realm of marriage.