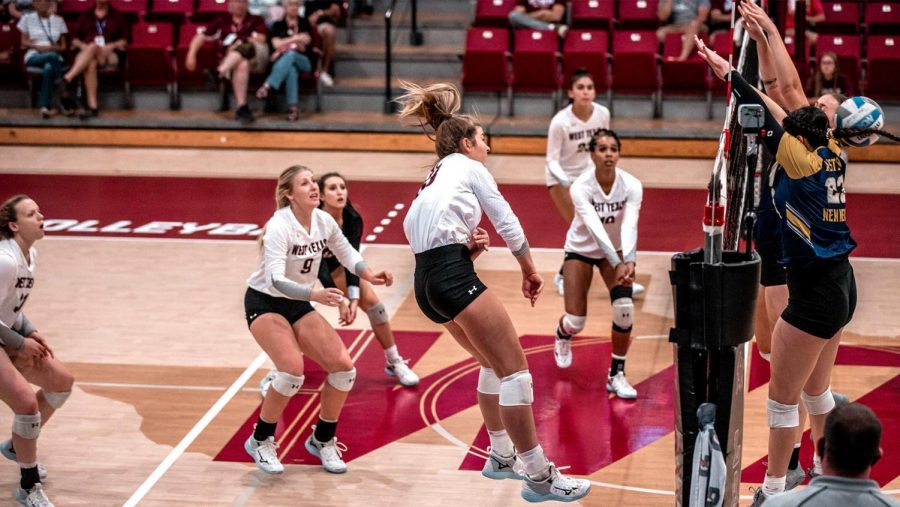 Lady Buffs with a spike for a point

Before the start of the 2021 season, the LSC Poll placed the Lady Buffs as fourth favorites for the season. Head coaches, sports information directors and media representatives cast their votes to determine where the teams place. The Lady Buffs opened the season with Adams State on Sept. 3 with the BritKare Lady Buff Classic.

The American Volleyball Coaches Association has voted the Lady Buffs into their Top-25 Poll for the fall semester six times in a row. Chandler Vogel, a senior and the libero of the team, has a total of 4.8 digs. Torrey Miller has a total of 4.38 points for each set, averaging 3.85 kills.

The Lone Star Conference has invented a ticketing structure that allows fans to watch matches on digital platforms. Passes can be bought for $10 for a daily game pass. $50 can also be paid for an all-season pass to watch all volleyball matches. Previous games can also be downloaded for $10. Tickets can be obtained at LSC Ticketing.

Britkare Home Medical made a generous donation to the Lady Buffs by renovating “The Box” into a new state-of-the-art court called, BritKare Court. The new court has a Tara flex surface- a feature most division I schools use. The just ended Tokyo Olympics featured volleyball courts with the same surface material.

The previous facility, “The Box”, has been home to the Lady Buffs winning 13 regional trophies, three NCAA Division II Championships and 19 Lone Star Championships. The announcement was made by WT Athletics earlier in the fall semester.

Kendra Potts is the coach of the Lady Buffs, with an unbeatable 32-11 record for the season. She is a three-time All American and an LSC all-time assists leader with 6,087. Kendra Potts in an interview praised her team for their win against Eastern New Mexico on Oct. 4, and what to look forward to in subsequent games.

The Lady Buffs return to action this weekend to face-off this Friday to play the Rattlers of St. Mary’s in San Antonio. The team also plays the Hilltoppers of St. Edwards this homecoming Saturday, Oct. 9. Time for both games is 6 p.m. and 1 p.m. respectively.