WTAMU wheels home with the win over ENMU 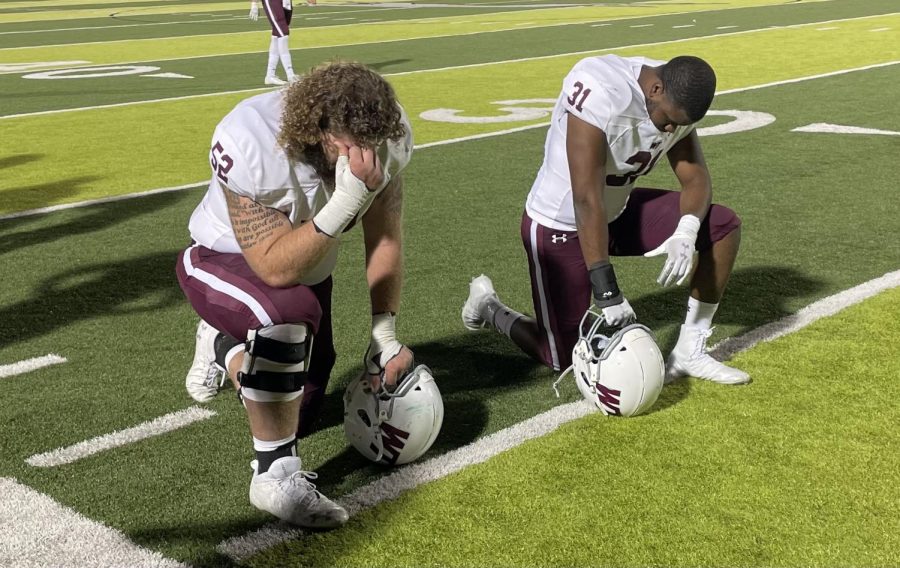 Zane Madison, center, and Christoper Thomas, Linebacker, Kneel in prayer before the game

There are rivalries that are built with respect and those built on hatred. On Oct. 16 at 7:00 p.m. at Eastern New Mexico University’s Greyhound stadium only hatred filled the air. The history between ENMU and West Texas A&M University is the definition of neck and neck. Each of the two teams are tied with 11 wins over each other a piece.

However this was not the case for the fight over the wagon wheel on Saturday night. The Buffs absolutely dominated the Greyhounds the entire game. The performance was so impressive that the starting unit for the Buffs was pulled out during the fourth quarter. The Greyhounds made two touchdowns in under five minutes of the fourth to pad their defeat as much as they could against a backup defense.

Playmaker Tobias Harris, junior defensive back, had his hands all over the football. Harris was able to snag three interceptions taking back two of them for defensive scores. For the season he now has four interceptions with three of them being taken back for points according to Buff athletics.

The Buffs defense is ranked number 13 in defensive touchdowns in division II football according to the National Athletics Association.

Brandon Blaire, junior running back, was trusted quite heavily on the night as he saw a sizable workload of 15 rushing attempts and totaled 68 yards with a well done four and a half yards per attempt and a touchdown. Nick Gerber, junior quarterback, became a dual threat during the game, deciding to run all over ENMU. Gerber was the leading rusher for the game with 73 yards and a rushing touchdown. All of these statistics come from the team Individual box score.

When the game was over there was only one thing on every WTAMU player and fan, the wagon wheel. For the entire community at WTAMU winning the wagon wheel is one of if not the most important thing. The wagon wheel is a prized traditional treasure that the Buffs managed to win in 2019 and take home in a 35-14 victory. Before the start of the game the wagon wheel is placed on the side of the field between the two teams in what they call the “neutral zone”.

When the Buffs defeated ENMU 44-24 the wheel laid in wait while everyone supporting WTAMU ran to it in celebration of defending their prized possession.

Fredi Cecena, senior lead equipment manager, has seen his fair share of wagon wheel games and felt the ups and downs of the outcomes. He was able to give words of insight on how meaningful this game is.
“ The wagon wheel is pretty much like the players say it is our superbowl. You can have the crappiest season, you can be one and 10 but as long as that one is the wagon wheel you’re a happy camper. Winning it I can’t really describe it. It’s kind of like a religious thing, when you run and you don’t even shake hands with your opponent. You just run.” Cecena said.

The Buffs have a challenge at home vs Texas A&M Commerce University on Saturday, Oct. 23 at 6:00 p.m.