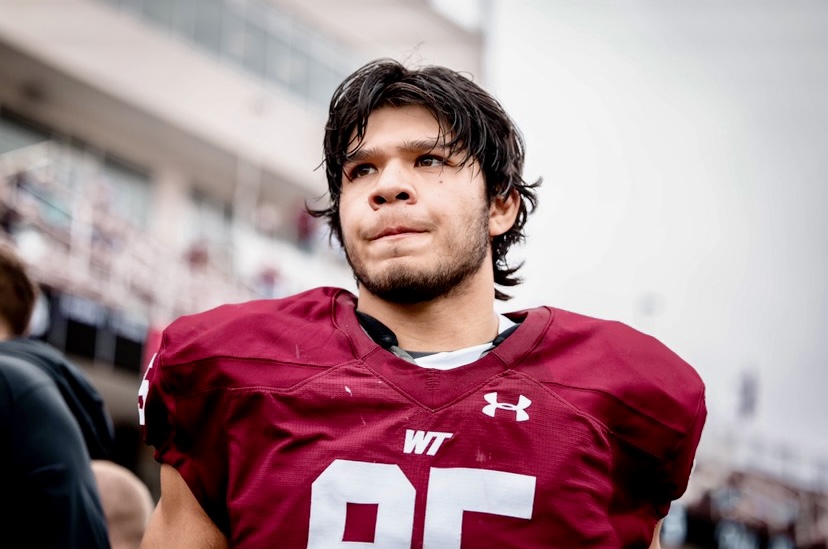 Dillon Mata taking instructions from his coach on the sideline

Austin native, Dillon Mata plays the defensive line as a lineman for the West Texas A&M University’s football team. The six-foot-two-inch redshirt is a senior, reading general business and an entrepreneurship major. The 2021/2022 academic year is his fourth year with the Buffs.

Mata’s passion for football began as young as age three. He zoomed right into tackle football at the age of six, where his mom would put football pads on him even when he didn’t want to go for practice. Mata attributes his success as a football player to his family, especially his mom.

“I was raised by a single mom growing up and she put basically her whole life into this in order that I can do the things and participate in the things that I wanted to,” Mata said.

“Aside from football I see myself to be an extroverted person, more down to earth person,” Mata said. “I think people see me with the pads on and they see me like someone who is a stereotypical football player.”

By the end of the 2020 football season, Mata had represented the Buffs in the last three games, while making starts against Pittsburg State University and North American University. The defensive liner had 15 tackles to his credits, 1.5 sacks and a single tackle for loss. During the Buffs’ game against Angelo State University, Mata made four tackles to propel his team to a win.

Outside of playing football, Mata loves people and loves to live life to the fullest while taking advantage of every opportunity that comes along with him. After having three knee surgeries already, Mata has other aspirations after graduation.

“I have always seen myself to be a businessman…. I have aspirations to open my own business one day,” Mata said. “Football is cool and all, but there is more to life than sports and stuff like that, so I am excited to get on this new journey after next year.”

Mata plays a leadership role as a senior in the team by being uplifting, and not to dwell on the past, just so the job can be done. The Buffs currently are ranked number one in the Lone Star Conference.

“I am proud of the team that I play with, and I think that everybody brings something special to the table you know,” Mata said. “We go out every morning and practice and there is great energy. This is my fourth year here and I haven’t felt this confident about a team before.”

As someone his siblings and teammates look up to, Mata encouraged all WTAMU students to show up for themselves and to stay on top of their grades. As final words, he also entreated everyone looking up to him to put in maximum efforts every day to be the best versions of themselves.

“I have a brother who is a senior in high school and something I try to emphasize to him is ‘Be a leader.’ You cannot be a leader if you do not do things right,” Mata said. “You have to be willing to do the worst and the toughest things in order to earn that respect from your teammates.”