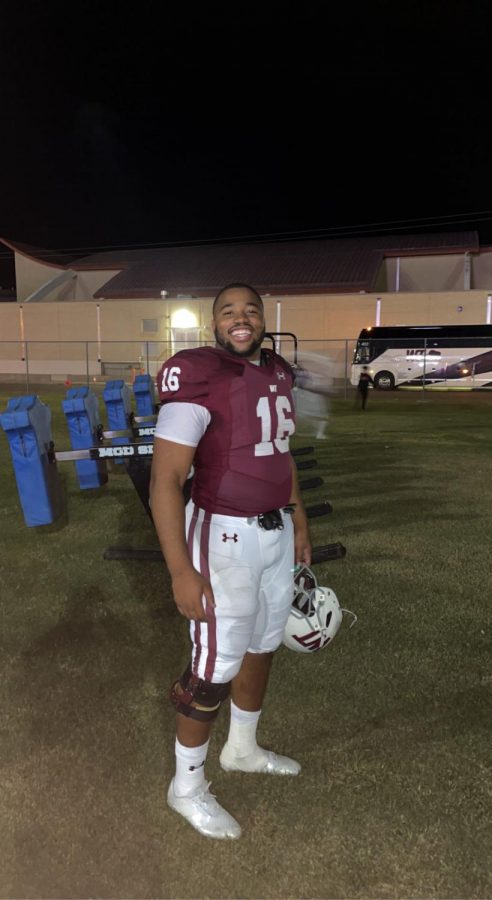 William Shakespear once said, “My crown is called content, a crown that seldom kings enjoy.” Enjoyment is not what the Texas A&M Kingsville Javelinas were given when all things were said in done after the game. Meanwhile, the Buffs were content taking the win against Texas A&M Kingsville’s homecoming 35-23.

The game was an up and down performance, as the Buffs surrendered a safety immediately on their opening drive, however, from there the trend went upwards. Both of the scores in the first quarter were on the ground. Jordan Johnson, senior tight end, was able to run in for a two yard score.

Nick Gerber, junior quarterback, once again provided valuable play with his legs as he was able to run in six yards for the second touchdown. Gerber has been able to score five touchdowns running the ball for 39 yards for the season, according to Buff athletics statistics.

However, things started to turn sour ending the second quarter until all of the third quarter. The Javelinas were able to score 13 unanswered points against the Buffaloes. The crowd was filled with hope as they tossed their tortillas on the sidelines and the Hogs were showing signs of life.

In the third quarter, it looked as if things were going to end how every loss this season had gone, the Buffs getting in their own way and defeating themselves through self inflicted wounds. The defense missed tackle after tackle and the offense could not make up for it and score.

The rushing defense was starting to really suffer as Kingsville was able to go up and down the field by running the ball amassing 204 yards on the ground with 15 rushing first downs according to team statistics.

Once the fourth quarter started, Buffalo fans and Kingsville fans were on their seat as it was a small 21-15 lead that the Buffs held. Jarrod Compton, junior running back, was able to give the team some room to breathe, catching a 32 yard pass from Gerber and taking it in for a score making it 28-15.

Compton had a colossal game going for 145 rushing yards on 18 attempts with a receiving touchdown. Brandon Blair, junior running back, faced a leg injury during the game and Compton stepped in his place to deliver.

Unfortunately that was responded by a Javelinas touchdown in under four minutes left of the game. With the game now nearing a minute left and a score of 28-23, the Buffs went straight down the field and the man that started it all ended it all.

Johnson was able to run in for a one yard touchdown to increase the lead 35-23. The Buffs are now sitting with five wins and four losses for the season and are looking at the biggest challenge of the season next game.

Midwestern State University is sitting at six wins and only two losses. This game will be West Texas A&M University’s second to last game of the season, with both this and the last being back to back home games.

Midwestern is nearly top 30 in the country in third down conversion percentage sitting in at placement 33rd with 43%, according to the National Athletics Association. So its imperative WTAMU prepares for those specific situations.

Coach Andre Pope, defensive backs coach, talks about the process of getting stops on third down.
“We can’t give up chunk yardage on first down enabling second and short where they can take a shot knowing they still have third down,” Pope said.