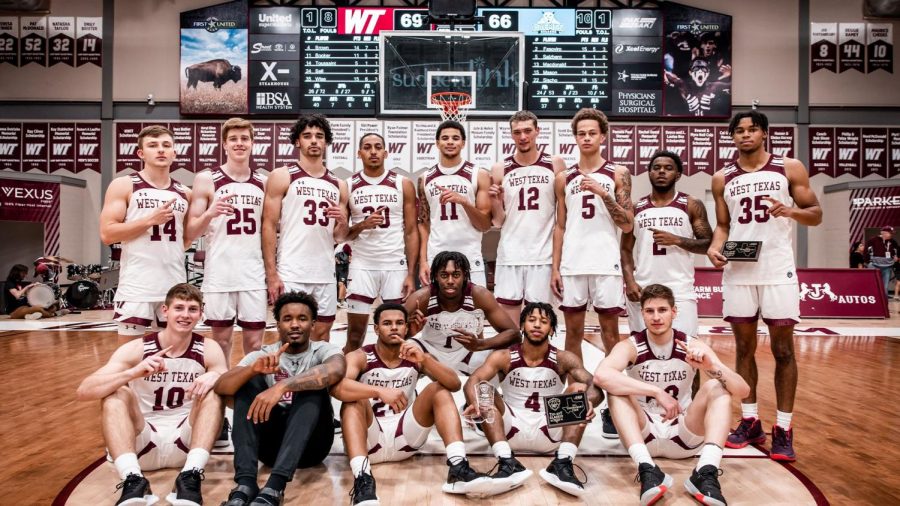 Buffs showing off their trophies after defeating the Daemen Wildcats in the Tipoff Classic on Oct. 31, 2021.

The fall season is the most active season in the academic calendar of most colleges and universities across the United States. This season, West Texas A&M University is most active in football, soccer, volleyball, basketball, cross country and golf.

The stress of academics is enough for students of WTAMU and what better way to release stress than at a sports event? With the cheers and the “wows” and “ohs” that come along with it? To some students, sports is not only a way to be active or show support for their schools, but a way to show commitment and love towards the school to which they are affiliated.

The football team began on an impressive season roll by winning their first home game. They impressed the community also by winning their homecoming game. Out of nine games, the Buffs have won five, and lost four so far. Today at 6:00 p.m. The Buffs face off with Mid-Western State University in their last but one game for the season. In an Interview with Dillon Mata, the defensive lineman described his team as one of the best he has had so far, in his football career.

The volleyball team has been on a winning streak for the most parts of this semester. According to GoBuffsGo, the Lady Buffs fell to the Rambelles of Angelo State University in their most recent game. On Nov. 3, 2021, the Lady Buffs were ranked seventh in the first National Collegiate Athletics Association (NCAA) South Central Regional Rankings. The team has won more matches than they have lost this season.

The men’s soccer team is ranked number six in the second round of NCAA Division II Super Region four rankings on Nov. 3, 2021. After recently defeating Oklahoma Christian to sweep the season series, the Buffs welcome Mid-Western State University in Canyon for a classic showdown today at 2:00 p.m. The Lady Buffs also, are ranked eighth in the first NCAA Division II South Central Regional Rankings on Oct. 27, 2021. They host Texas A&M International on Nov. 11, 2021.

The men’s basketball team has for the sixth time in a row, opened the season 3-0 after they claimed the title for the 2021 Tip Off Classic Championships. Ranked number three, the Buffs host Western Colorado next on Nov. 12, 2021. The Lady Buffs were tabbed third in the LSC pre-season poll. They host the South-Central Regional Challenge against South Dakota Mines and Colorado Mesa at the First United Bank Center from Nov. 12 to Nov. 13.

In golf, the Buffs tied in 12th place during The Tulsa Cup at Broken Arrow in Oklahoma on Oct. 26, 2021. This was their last match for the fall season, as they prepare to make their spring campaign beginning February 2022. The Lady Buffs on the other hand concluded this season with their first tournament win at the Tulsa Cup. The Lady Buffs are back in action for the Texas A&M International tournament in Laredo, TX on Feb. 7 and Feb. 8.

Altogether, the various teams have done themselves and Buff Nation proud through their impressive performances. GO BUFFS GO!