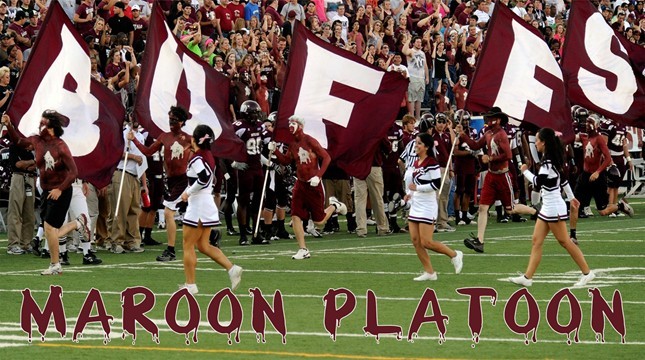 Beginning in the 2021 fall semester, West Texas A&M University saw a different mode of cheering at the Buffs’ football games, the Maroon Platoon. During official home games of the Buffs and Lady Buffs, Maroon Platoon is there to cheer. The group was first started by student-members of the Wesley Foundation.

Maroon Platoon does not just support WTAMU athletics events and games. They also are meant to make special appearances during certain community events such as Family Weekend, New Student Orientation, Buff Branding as well as Welcome Week. Their involvement is targeted at helping students develop a sense of connection between student organizations and the entire WTAMU community.

“At Maroon Platoon, I am surrounded by people who are also fans of the sports and obviously, we love WTAMU, we support our teams too,” said Caleb Crum, a senior and media communications major.

The unique feature of the Maroon Platoon is their aesthetic qualities. They face-paint, carry cylinders around with bells and cymbals that “make the noise” in support of WTAMU during the events they go to cheer for. In a section in the stands behind the teams, they sing chants as well. While cheering, they are mindful not to cuss or use any offensive language, regardless of the outcome of the game.

“I just like having the athletes know that we are there to support them,” Crum said. “That we are like their biggest supporters and that we love to watch them play and we love cheering them on.”

To the students who make up the Maroon Platoon, having a sense of family and community is everything, because they are surrounded by friends and people who are just as energetic. Maroon Platoon members are offered meal tickets they can use at the concession stands during each individual home football.

To be a Maroon Platoon member, interested persons are encouraged to contact any of the leaders of the SEES, and later undergo training. For more information on the Maroon Platoon, kindly visit HERE.