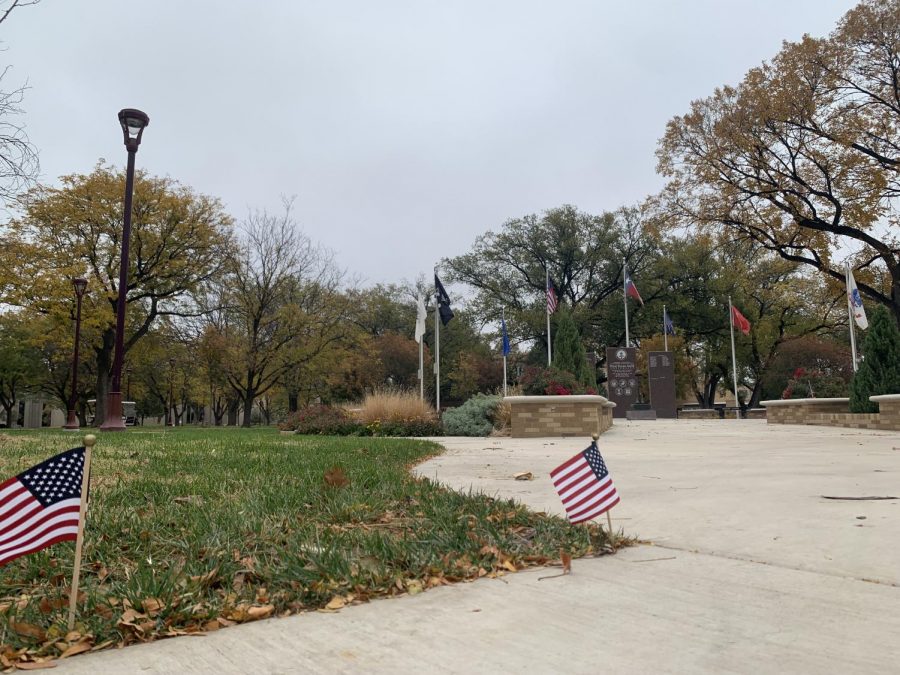 Canyon, TX – Nov 10, 2021: Flags of the branches of the U.S. military float in the light breeze with smaller american flags line the concrete path to the WTAMU Veterans Memorial.

Since its inception in 1919, the United States has been honoring our military veterans on Nov. 11 for their sacrifice to the wellbeing of our country and society, but what does that actually mean in our modern world?

Within the U.S. there are 19 million veterans, which accounts for around six percent of the total population. At 41%, most veterans served in the gulf war, which outnumbered vietnam war veterans starting in 2016.

Technology advancements, driven by the close to trillion dollars provided by the Defense Authorization bill, human lives are increasingly being replaced by drone warfare. These drones need to have humans behind the controls, but can be placed around the world rather than in the firefight. These advancements have helped eliminate casualties on our side of conflicts, but have cemented our reliance on technology.

In recent years, 40 percent of Gulf War era veterans have developed some type of service-connected disability. This startling evidence comes at a stark comparison between the 26 percent of all veterans. The U.S. The Department of Defense (DoD) recognizes that the number of veterans is going to continue to decline, as they have been since the 1990’s. It is estimated by 2046, there will be around 12.5 million veterans, a decrease of about 35% from current numbers.

Marine Corps top leader, Gen. David Berge, stated in an interview with military.com that there needed to be a change in how the Marines were hiring new personnel. “We have to treat people like human beings instead of inventory,” Berge said.

This disconnection with humanity in how the military works can be seen on the streets of Amarillo and around the country with unhoused veterans visibly unhoused. The Department of Veterans Affairs (VA) estimates that there are 107,000 unhoused veterans on any given night. In conjunction with National Survey of Homeless Assistance Providers and Clients (NSHAPC), The Urban Institute found that 23 percent of unhoused people are veterans and the number for men is even more drastic at 33 percent of unhoused males are veterans. That’s compared to veterans making up less than six percent of the U.S. population.

With hundreds of billions being granted to the DoD, there should be plenty of funding for our veterans. When looking at the fifth most funded federal agency, the VA has increased its expenses from $70 billion in the 2000 fiscal year to $200 billion in 2019. This jump in funding, adjusted for inflation, makes the VA the second fastest federal agency in expenditure growth.

Increased spending on medical care has more than tripled from the beginning of the 21st century, which has placed a toll on the private health insurance spending on veterans. The higher priority group at the VA places those who can’t work and those with a Medal of Honor. This group is the largest priority group with almost 50% of VHA patients, or 2.1 million veterans.

There are resources and an entire federal agency focussed on addressing these effects, but there isn’t enough being done with the visibility of unhoused veterans on the sides of interstates. The best way for all Americans to recognize Nov. 11 is by advocating for societal protections for our veterans.

“This Veterans Day would be an excellent day for Congress to end backlogs at the VA, end the prohibition of cannabis, and reverse the chipping away of benefits to our Veterans,” said Clayton Tucker, Chair of the Lampasas County Democrats, in a tweet when recognizing Veterans day.

West Texas A&M University will be honoring Veterans day today with flags being placed around campus and flags being flown at half- staff. On Nov. 13, WTAMU will be honoring our veterans with a silent tribute at 8:00 a.m. at WTAMU’s Veterans Memorial and a special breakfast tailgate at 9:00 a.m. along 26th Street and Russell Long Blvd.