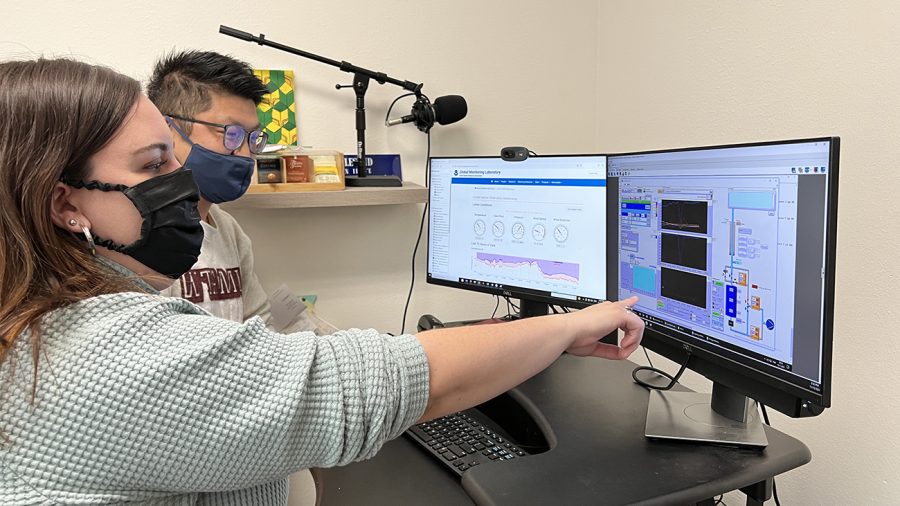 CANYON, Texas — A West Texas A&M University research team recently launched a study near the northernmost city in the United States that could have a long-range impact on measuring climate change.

The team — led by Dr. Naruki Hiranuma, associate professor of environmental sciences in WT’s Paul Engler College of Agriculture and Natural Sciences — journeyed to the north slope of Alaska near Utqiaġvik to measure aerosols in ice-containing clouds. Aerosols, or ice-nucleating particles, are the microscopic material in the air that water vapor condenses around to form ice crystals that make up clouds.

Utqiaġvik, formerly known as Barrow, is “as Arctic as you can get in the U.S.,” Hiranuma said.

“Eventually, we will be able to tell how many ice crystals these clouds contain and at what altitudes,” said Dr. Elise Wilbourn, a member of Hiranuma’s research team. “As we learn more about how much ice is present versus liquid water, we can tell how much sunlight the cloud is going to reflect or absorb.”

That’s important, she said, because the Arctic and the Antarctic are seeing the effects of climate change in more extreme ways than other parts of the earth.

“Before more of that warming happens, we need to get a baseline to see how the Arctic atmosphere absorbs or reflects the sunlight and see how that will change in the future,” Wilbourn said.

Clouds containing more liquid have a puffier appearance than ice-containing clouds, which have a wispier appearance. The puffier clouds reflect more sunlight, while the wispier ones absorb sunlight or allow it to pass through more easily and warm the ground.

“The heat energy can get trapped by clouds and the atmosphere, and it won’t have a cooling effect,” Wilbourn said. “It’s important to characterize what clouds are present and where so we know how much sunlight is getting absorbed versus getting reflected.”

Hiranuma worked with scientists in Europe who developed a remote-controlled atmospheric simulation, or Portable Ice Nucleation Experiment (PINE), chamber that previously has been deployed in the Azores and in Northeast Oklahoma to study cloud formation in their respective environments.

“WT is the first university in the world to have purchased a PINE and to have deployed it,” Hiranuma said.

Hiranuma’s focus on such studies is what drew Wilbourn to the University as a post-doctoral research assistant.

“There are not a ton of ice-nucleating particle research positions in the U.S.,” Wilbourn said “I wanted a project that incorporated field work and would take place at a smaller university. There are so many good opportunities here, especially now that we’re able to travel more and get back out into the field.”

The team set up their study Oct. 20 at a National Oceanic and Atmospheric Administration newly expanded Barrow Atmospheric Baseline Observatory near Utqiaġvik staffed by station chief Bryan Thomas and technician Ross Burgener. The WT team will return periodically, but data can be pulled from the PINE while the team is on the WT campus, thanks to a collaboration with WT’s Instructional Technologies Office, led by James Webb, vice president for IT and chief information officer. Additional IT and logistics support was provided by Pawel Lech of the Argonne National Lab, NOAA Observatory Field Operations Manager Christine Smith, and Department of Energy team members Jasper Hardesty and Frederick Helsel.

In addition to Hiranuma and Wilbourn, the WT team includes Carlos Guerrero, a sophomore biology major from Amarillo; Jacob Hurst, a junior physics major from Canyon; and Sarah Alrimaly, a junior environmental science major from Hart.

A focus on regionally impactful research is a key component of the University’s long-range plan, WT 125: From the Panhandle to the World. That plan is fueled by the historic, $125 million One West comprehensive fundraising campaign.