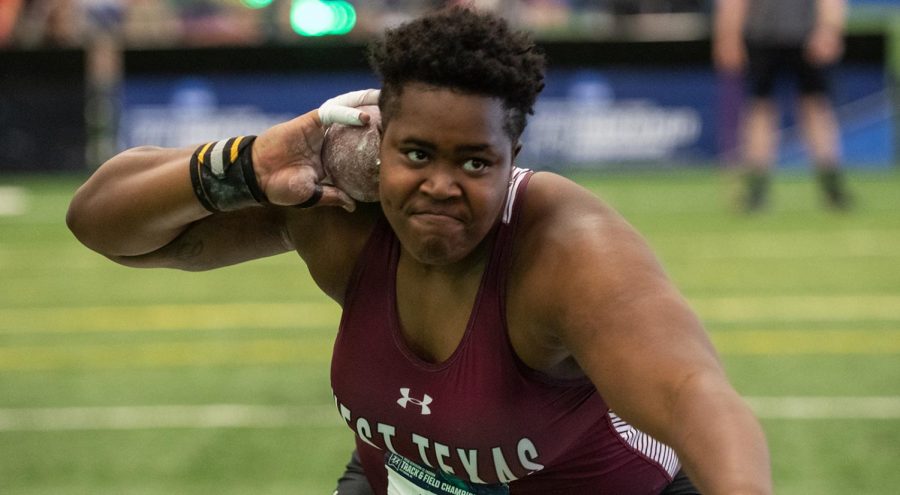 For many athletes, engaging in one sport can be cumbersome, but for Zada Swoopes, excelling at three field events is just as well managed. Swoopes is a West Texas A&M University track and field athlete with specialization in the throws: discus, hammer and the shot put.

The senior, majoring in sports and exercise science and minoring in Spanish has been a Lady Buff since 2018. After high school, Swoopes was offered a dual scholarship into WTAMU specially to join the basketball team. In her first indoor season with the basketball team, she joined the track and field team to compete in the shot put, which she won. Since then, track and field has been her new home.

These three sports require technical knowledge in their own respects because each one is different but very similar in different ways. They also entail a lot of practice and perfecting imperfections, while making those imperfections as perfect as possible.

Coming from a family of athletes, it was not very difficult to tow the same line.

“I come from a family of athletes,” Swoopes said. “My brother played in the NFL, mom and dad went to college for basketball and football, aunts went to college for basketball, I had a cousin who went to WNBA, Sheryl Swoopes, and she was one of the best WNBA players. Once I truly knew like track is my thing it was probably making that decision between track and basketball my freshman year.”

Swoopes currently is an outdoor national Division II champion and the Lone star Conference Female Athlete of the Year. She has All-American honors for multiple times in her career. Swoopes won the national title for shot put twice at the Division II national championships. She also won the discus throw during the same period. She also placed third in the hammer throw. At the Masked Rider Open, Swoopes broke her own school record at the discus throw with a toss of 56.10 meters. In her indoor season, Swoopes won the national title in shot put, placed second in the hammer throw as well. At the end of her spring season and prior to the Olympics, Swoopes qualified to the U.S.A. Olympic team trials.

“Behind the scenes, I would say it takes a lot of commitment and time and a lot of patience because, to get to the level I’m at, it takes a whole lot of working on the things that you don’t want to work on, on certain days,” Swoopes said. “… But then I have to remind myself that I am here for a reason, and this is what I love to do, and It’s more than something that I desire to do.”

As hobbies, Swoopes likes to play video games, relax at home and just do schoolwork. Life aside track and field would have still been adventurous for Swoopes, as she would have ventured into either physical therapy, coaching or nursing.

“Just like something my coach said, there’s always something you can fix so, each track meet, each practice is always thinking about the things that I can fix and I know to not get complacent because when I get complacent, I get stuck in one spot,” Swoopes said.

The Whitewright native dazzles back into action in the spring, as the indoor season begins for track and field. Looking forward to that, according to Swoopes, is something that brings herself and her teammates so much to work out for.