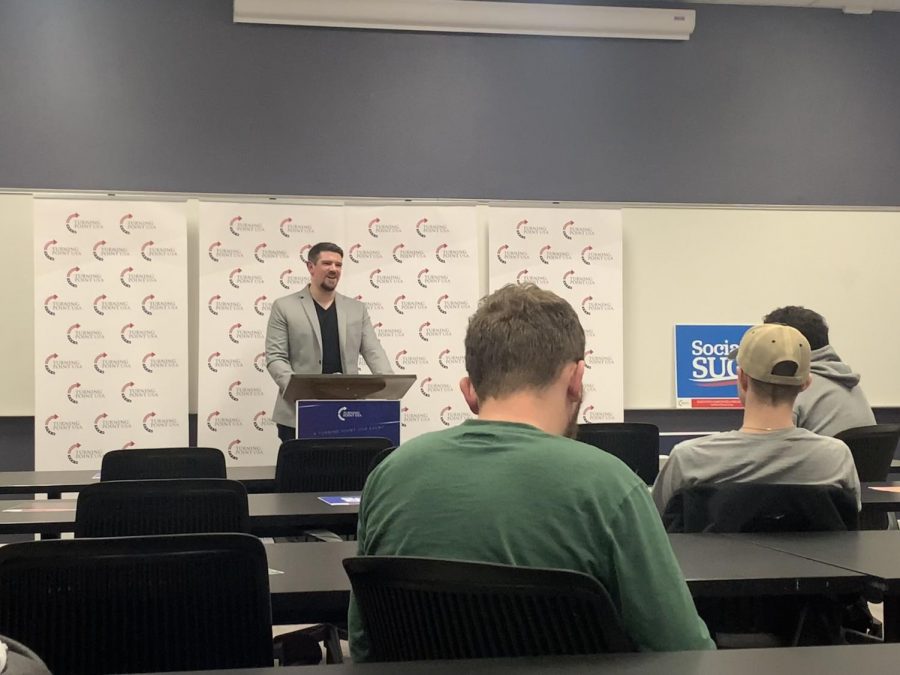 Several Politicians and political figures have begun visiting West Texas A&M University and Amarillo as the midterm election of 2022 is less than a year away and the political primaries in March.

Early into the night on Wednesday, the WT Turning Point USA organization hosted a guest speaker, Ian Haworth, on campus. Claims of censorship have been a topic of discussion within conservative spaces since the explosion of Facebook and the former Facebook employee spent his time highlighting conservative issues.

“[Conservatives] are standing at a crossroads in terms of how we view big tech,” Haworth said. “We have allowed the left to set the standards for what isn’t okay and we are now suffering the consequences.”

Throughout his speech and interaction with students, he framed the discussion around the left and the conservative movement, with the conservative principle as the moderate middle. Close to two hours was interjected with claims of civility and divisive cultural issues in a room meant for meaningful discussion about the responsibility technology has in creating a marketplace of ideas.

“There’s a reason big tech suddenly starts to bend to the demands of the left in late 2020,” Haworth said. “They were just bending with the political waste of the day, and it’s up to us to turn the tide.”

This form of political activism has been mirroring the movement of the right for decades, mobilization and talk of securing the Second Amendment, against any forces. Haworth said that the “left are driven by nothing but power” and at the same time with “building a society which values and celebrates the unique set of American values like free speech.” This connection with identifying the left as “power hungry” was met with support of a cultural revolution towards free speech.

On Thursday afternoon, the Department of Political Science and Criminal Justice held a meet and greet with the Canyon, TX state senatorial candidate, Tim Reid, who is running for the State Senate District 31, WTAMU’s district.

“I guess I have to consider myself a politician now that I formally announced that I’m running for a political office,” Reid said. “The big issues in this campaign are going to be education, the [U.S. – Mexico] border and I think the third most important for the Texas panhandle is sustainable water and energy.”

The event was designed to be a connection for political science students into a local campaign. Reid has never run for anything besides the Canyon ISD Board of Trustees, which he served from 1997 to 2005 with the last year being the vice president. Jesse Quakenbush, known for his controversial “Big Beaners” restaurant, is the only other Amarilloan to announce his candidacy for State Senate District 31, which has been represented by the former Amarillo mayor, Kel Seliger, since 2004.

“I believe in local control of government,” Reid said. “If you could go to your city council, or your county commission meeting, you can redress your [official] personally. It has more of an effect, especially on the people you elect, because now you’re face to face.”

With Reid being a local man who has been involved with the private sector and the criminal justice system, he has a more open approach to being a potential bureaucrat. This availability is not normally afforded when you talk to someone who is running for congress or a statewide office. However, students and local residents will get to meet more politicians in upcoming months.

Beto O’Rourke recently announced his candidacy for governor and will be making a stop in Amarillo at 6:00 p.m. Dec. 12 at a later disclosed location.

“When you vote for somebody, It’s not whether they agree with your politics, or do this or that,” Reid said. “Do you think that they have the intelligence to actually have a civil debate and come up with good legislation that’s going to address the problem?”