200 ways to stay warm for the winter 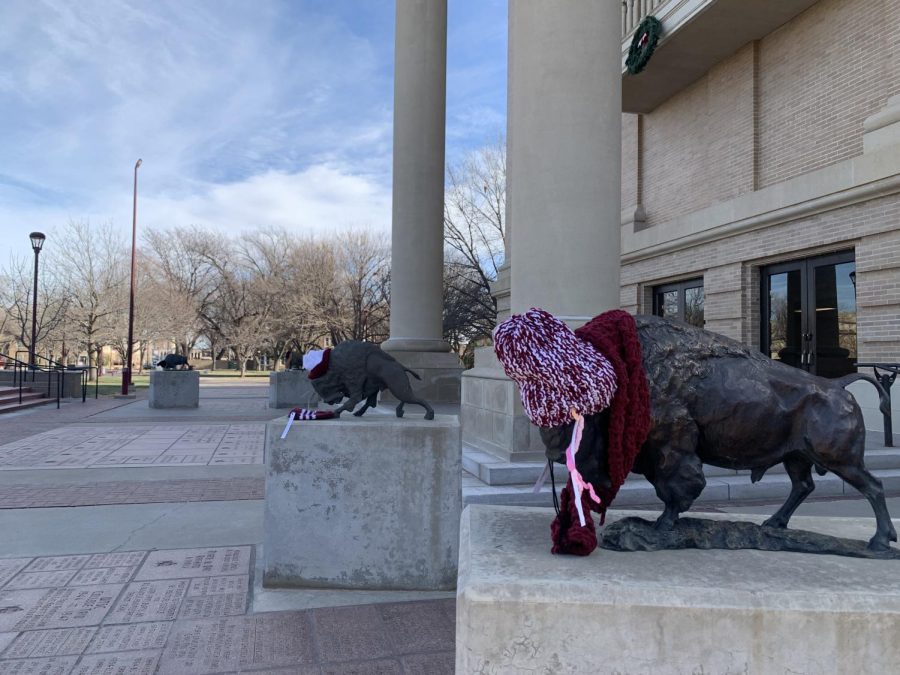 Beta Sigma Phi donned hand-knit hats and scarves on the memorial statues of past live WT mascots during the 2022 Yarn Bombing around the Charles K. and Barbra Kerr Vaughn Pedestrain Mall , Sunday, Jan. 9, 2022.

Beta Sigma Phi, a non-academic sorority, provided around 200 articles of clothing for students to pick up anonymously around the Charles K. and Barbara Kerr Vaughn Pedestrian Mall for the first day of spring semester.

“I’d read an article about people in other places, putting out items for [unhoused] people. I thought that’s a wonderful thing to do,” said Dr. Jean Stuntz, Regents professor of history at West Texas A&M University. “Then I thought, you know, I bet our students could use a nice warm cap or a scarf.”

The nine members of the sorority have been “yarn bombing” around the “Original Texans” sculpture since 2016 for students and people of the community to acquire.

“If students want them, they can have them to stay warm,” said Dr. Darlene Pulliam, recently retired McCray Professor of Business, Regents Professor and president of the local Beta Sigma Phi chapter.

“[Yarn bombing] was a way to get things to people that did not have the warm stuff they needed,” Pulliam said.

This Beta Sigma Phi tradition has become a great way for the WT community to gain warm clothing for their well-being, especially considering that some students don’t come prepared for the cold winters in the Texas Panhandle.

“Students visit when they’re coming to tour the campus and they’re not expecting it to be this cold,” Stuntz said. “The cold is a surprise to a lot of people.”

With the amount of students coming from all over the state of Texas and around the globe to attend WTAMU, students do not always come prepared for the temperature drops of 50 to 60 degrees within a 12-hour period that are not uncommon in the winter months for Amarillo.

“The first three years of helping with putting out [clothes] I did not tell them that I knit,” said Berlin McIntosh, secretary in the history department. “Then I just said, ‘You know what, I’m gonna knit’.”

McIntosh started helping out in a massive way last year when she was required to be quarantined for COVID-19 prior to visiting the Philippines to see her family. She has continued her passion of knitting and, this year, she wanted to continue her efforts by setting a goal amount of items to finish by the beginning of spring semester.

Averaging about 1 item of clothing a week, McIntosh has helped create the massive amount of clothing to cover the pillars of the Buffalo Fountain.

“We’d love to have people come help us and we’d love to have some more members of our chapter if people were interested in it,” Pulliam said. “It’s just a bunch of women doing good things.”

“Students will start coming and choosing stuff before we’re finished putting it out and so we can see their faces and see how happy they are,” Stuntz said.

Beta Sigma Phi helps the community by giving money to Meals on Wheels, selling toys to kids at the Fourth of July parade and taking peanut butter to Fill with Hope, previously known as Snack Pak 4 Kids. If you’d like to inquire about joining or assisting in their efforts you can send an email to [email protected]