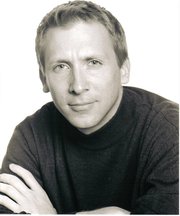 In “Cacoethes” the author, M. Scott Craig, uses a collection of fiction and poetry to guide readers through a relationship and tells of love along with the positive and negative obstacles and experiences that are naturally bound to follow.

“Dating and being in love is sometimes a confusing addition to our world,” Craig said.  “It’s beautiful and frustrating, and we love it and hate it at the same time.”

Craig is a WT alumnus whose career started in singing and acting. During his time at WT, he was involved in TEXAS: The Musical. It was the beginning of a stage career that lasted ten years and came to an unexpected end when Craig realized the challenge was gone.“Not that I was a perfect actor, but the challenge of it was gone, almost overnight,” Craig said.

The end of his career as a performer initiated his desire to write. Ideas were written, formed and further created while Craig worked to develop his personal writing style.

“I became much more passionate about creating stories from scratch rather than acting them out,” Craig said.

In 2007, Craig broke off from writing in order to focus his time on studying helicopter piloting. It became a new passion for him to explore.

With a changed voice, he came back to writing in 2009, and “out came this overflow of material that had been waiting to come forth,” Craig said.

He has a book called “Thoughtica,” that is in the process of being published and a third book called “Inhale,” that is expected to be released by next year.  According to Craig, “Thoughtica” explores the physical aspects of relationships. “Inhale” looks into  the large expression of human emotions from despair to shocking feelings people do not expect to experience. The three books are not a part of a connected series, but they can interrelate with one another.

“I don’t really enjoy self-help books, so I made sure that these books were of fiction and poetry, not essay, but it happens to be on a theme that I think everyone can relate to and one that many people need a little helping hand with,” Craig said.

Along with his writing, Craig continues to work as a helicopter pilot in Missouri where he lives with his wife Anissa.
Web Editor’s Note: The wife of M. Scott Craig, author of “Cacoethes,” is Anissa and not Melissa as stated in the original posted version story. The Prairie regrets the error.